THE SOMME
Between 1 July and 18 November 1916 Britain’s new volunteer army took the leading role in a battle on the Western Front for the first time.
The Somme offensive was intended to achieve a decisive victory for the British and French Allies over the Germans on the Western Front after 18 months of trench deadlock.  Planned as a major offensive it was reduced to a limited offensive to relieve pressure on  the French at Verdun.

14th (Service) Battalion (Young Citizens) Royal Irish Rifles
Formed in Belfast in September 1914 from the Belfast Volunteers. Came under orders of 109th Brigade, 36th (Ulster) Division. Moved to Finner Camp, Bundoran in December 1914, going on to Randalstown in January 1915 then Chyngton Camp, Sussex in July 1915. In October 1915 landed at Boulogne.  Finally disbanded in France in February 1918.

The British 4th Army advanced on a 15 mile front North of the River Somme with the 36th (Ulster) Division deploying from a front running roughly from the North East of Theiphval Wood to Railway Road North West of the River Ancre.  Although the Germans were weakened, the Allies failed to achieve all of their objectives and the war was to continue for another two years. Over a million men from both sides became casualties in the long and bitter struggle on the Somme in 1916.

Second-Lieutenant Matthew J. Wright
On 1st July 1916 the 109th Brigade were to take the Schwaben Redoubt by means of a direct frontal assault. 2nd Lt. Wright and 2nd Lt. R. L. Lack both of 14th R.I.R became casualties that day while they were attempting to rescue a wounded colleague, 2nd Lt. G. Radcliffe.
After the war a small headstone was placed in Thiepval Wood in memory of 2nd Lt. Matthew John Wright.  This was later removed to and installed in the nearby Ulster Tower for safekeeping. 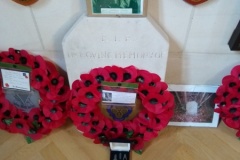 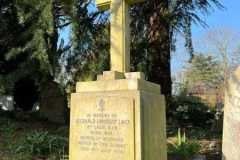