A formidable strongpoint in the German defence system consisting of a mass of gun emplacements, trenches and tunnels.  The initial objective of 109 Bd. On 1st July 1916.  It was taken and indeed ground for some distance beyond it also.  However the Divisions to either side of the 36th did not keep up thus leaving the Ulstermen hopelessly exposed to fierce attacks from both their left and right flanks.  Severly mauled they were eventually forced to retire to the first German trench line. 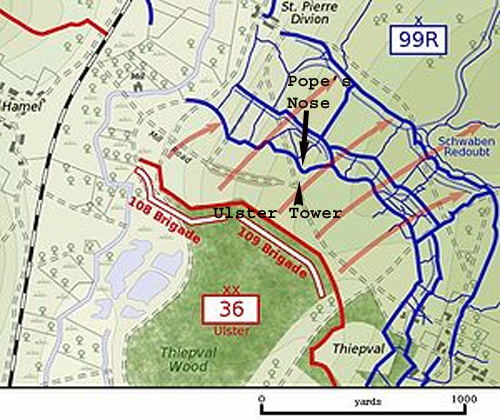 Not shown on the map 107 Brigade were positioned behind Theivphal Wood with orders to advance through Thiepval Wood, following the 109th Brigade, pass through the leading Brigades and attack the “D” line then to extend left.

West of the 36th Division is the river Ancre, a tributary of the Somme which lies some 5 miles to the south.

The ‘Pope’s Nose’ was a small German salient so named by the Ulstermen.  The Ulster Tower was later built just south of it on Mill Road (Sunken Road).

By order of Grand Lodge all meetings are suspended. Keep in touch with your Brethern via ZOOM or WHATSAPP. Contact the Almoner for help with these apps.